Today is a very special day. 75 years since the end of war in Europe. It was called V.E. Day. V.E. stands for Victory in Europe. World War 2 didn’t end on that day because there was still fighting in other parts of the world.

There will be a minute’s silence across the UK today that you and your family might want to participate in.

My father fought in WW2.  First he ran away and joined the Black Watch, but his dad went to the barracks and explained he was only 15 and brought him home again. Later he joined the Household Cavalry, and even though it was the middle of the war, he still had to learn to ride a horse. I’ve posted a photo of his medals below.

My dad and I shared the same name. We’re both called Val Occardi. It’s an Italian name. However, the engraving on the back of the medals is Jock Occardi. Because my dad was Scottish and serving in an English regiment, his army friends only ever called him Jock.

Have a great weekend. 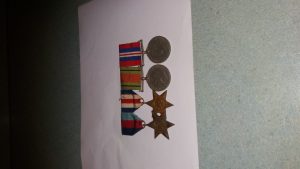 Oops! Another IT failure on my part. You’ll just have to turn your head to see Jock’s medals properly.